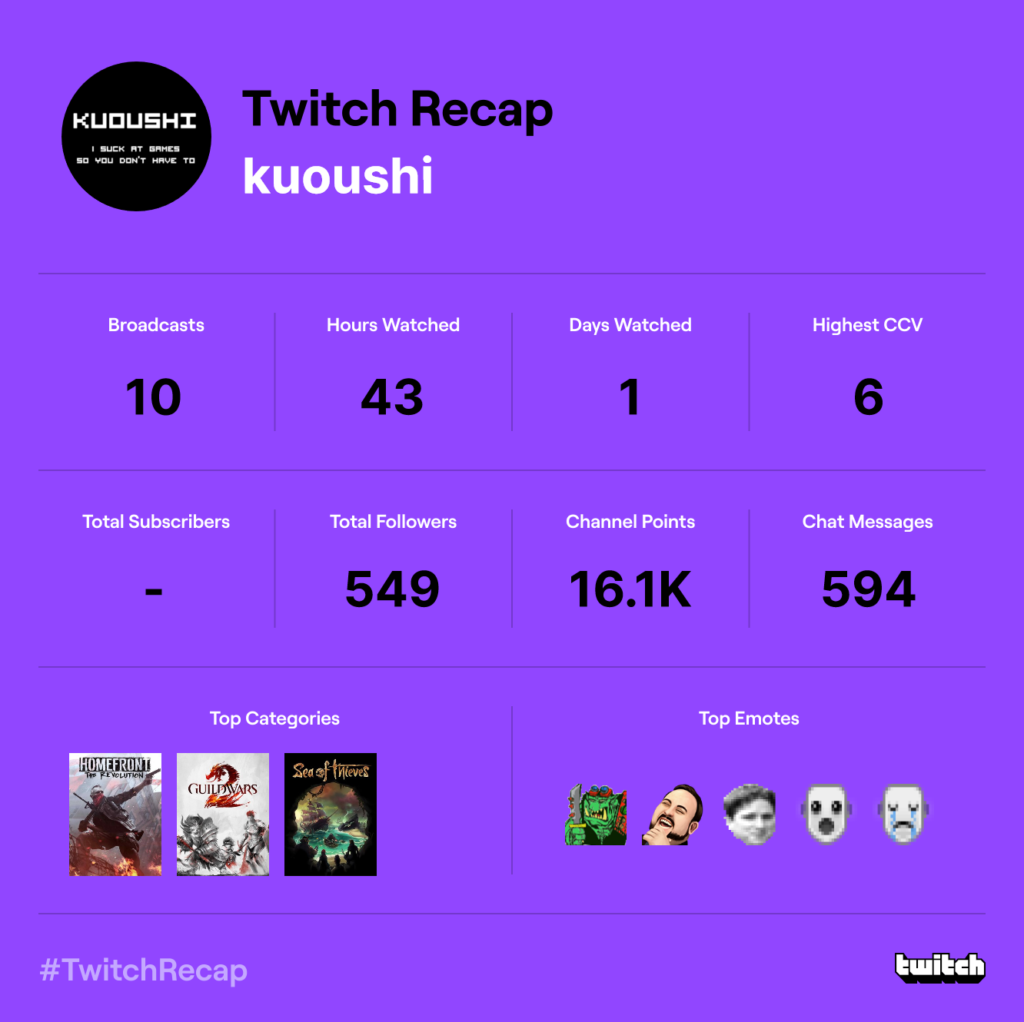 It's been a relatively quiet year around these parts once again. That isn't to say we haven't been doing anything, though. The site here has come a long way towards getting everything back to par with where it was long ago. Drunk and Saturday streams are making their way back into the archive at a good rate, with some that were never available before seeing the light of day again. For better or worse. We also wrapped up all the long form archives earlier this year so we have over a decade of content available in the archive. That's honestly pretty neat to think about.

We've also integrated Mastodon (and any other ActivityPub federated networks like Friendica, etc.) into the site entirely, which is a pretty neat because we can basically ignore Twitter and provide updates directly from the site. I'll be getting stream start notifications going through here at some point so if you do want that, then follow @kuoushi for those, plus notifications for whenever a blog entry is posted, or a new video archive is added, or even when I just feel like shooting off a quick note about something. It's a nice little feed of everything happening on the site, basically.

And last, but of course least, we did a few streams this year. Not too many, but also not the lowest year we've ever seen. Made it through some Homefront: The Revolution, fished a bit in Guild Wars 2 and raced a few skiffs, just some regular old kuoushi shit. Plus we started up a new stream frame with chat popups that I'm decently happy with. Gone is the handcam and massive frame, and back is the full screen video game like it should be. Handcam is still funny to me, though, so I might bring it back sometime.

But, that's about it for the year. Stuff's still happening here. I'm still planning to continue streaming as much as I'm able. Not planning on having anymore babies, so I might eventually get back into a regular schedule again. You never know.

Thanks for the years, here's hoping for more.

So it's obviously been a number of months since kuoushi's last stream, as well as since the last time an update has been posted here on the old blog. Time to remedy that a bit with a small update!

Basically, had a second kid so that slowed everything down. Just think of Vin Diesel saying family a few times and you're on the same page.

With that news now out of the way, on to site related stuff!

Drunk Streams Returning to the Archive!

Ever since the fall of Viddler, drunk streams haven't been something we could go back and re-watch for a long time. I'm remedying that now, but I have to watch through each drunk stream before getting it into the archive and some of these are absolutely rough. They will be offensive, and they probably won't be that entertaining by my current lofty standards of comedy even. I mostly only suggest them as an educational look back into what awful people we were back in the day. Or at least me, I was pretty stupid.

Don't worry, though, the more modern drunk streams with a much higher standard of humor will come in eventually. I just chose to start at the beginning and work my way up from there. There are like 430 or so different drunk or Saturday streams, so it's a lot to get through. Aside from the RoboCop stream anyway. I put that one in the archive in its entirety with no cuts whatsoever. Still the most effort stream I've ever done, which is saying a lot about the quality of the rest of my streams.

After drunk streams, I'll move on to getting things like the various specials and birthday streams up, though I might make an exception and go through to get a number of the 24 hour streams up sooner rather than later for no real reason other than to put them up.

A Return to Streaming and Doing it Live?

Uncertain when at this point, but it's still a thing I'm wanting to do. I'd like to get a schedule back up and going, but with two kids that'll be a bit tough. It's on my radar, as always. Don't give up too much hope. Or do, I'm not your dad.

If the latest streams section on this website hasn't clued you in yet, or the cool new stream calendar that I've put in hasn't caught your attention yet, you may not have realized that we've started up our next set of streams to follow Alice: Madness Returns -- Homefront: The Revolution. I have a rocky relationship with the Homefront series, stemming from the first game blocking all of my in-game progress with a waist-high barrier that I couldn't get across during a drunk stream a long ways back, and then subsequently just simply jumping over said barrier a few years later and beating the game. So, playing the sequel to that will surely go well and I won't have to worry about it being a buggy mess, right? Right.

Catch up on those Homefront: The Revolution streams in the archive, and maybe even join us live one of these days, or nights, or any of the other irregular times that I stream.

Now, with that out of the way, the real announcement for this post is that I have finally completed a significant amount of streams in the archive, and they're all available now. Basically, every single longform stream that we've done over the years, from 2009 all the way to today, is now available in VOD form. This doesn't yet include any of our drunk, Saturday, or otherwise special streams like the 24 hour ones, but it is a really cool significant milestone as it does cover the majority of our playthroughs over the years.

Here's a few of the more recently added streams to the archive: Thief, Suikoden II, Breath of Fire 2, Chrono Trigger (even though the audio desyncs), Clock Tower 3, Deadpool, and a bunch of other odds and ends and games.

Honestly, it's a lot of streams, and shit I've been doing this for a while. It's been neat for me to at least vaguely revisit all of these streams and see what a dick I've always been. Hopefully they're still enjoyable as entertainment to anyone who happens to go through them, and not just for my own personal entertainment from a historical (meaning, historical for me but not so much for the world) standpoint.

Thanks for all the times, ladies and gents. I'll keep streaming, but it's certainly been a long time from the beginning to now. Oh, and Happy New Year, I guess?